How We Got Started

The Winnipeg set dancing group got started as the result of the initiative of the Coish family, Carol Ann, Robert and Rebecca.  When they were living in Co. Antrim, for two years, they gave Irish set dancing a try and really enjoyed it (see below for more on their time in Ireland).  At the end of their two years they returned to Winnipeg with set dancing CDs and instructions, eager to start a group here.

The 2004 Winnipeg Irish Fest brought in Maureen Mulvey O’Leary from Toronto to teach Irish set dancing.  Following these workshops the Coishes started hosting set dancing classes at their home.  They were joined by other friends and some international folk dancers.  Jeremy Hull, an international folk dance teacher, has been helping with teaching and calling the dances.  By 2006 the group needed more space and has been meeting at Riverview Elementary School (see below).

Irish set dancing is a traditional form of dancing that developed in Ireland in the 1800s.  It is done in square sets of four couples to lively Irish reels, jigs, polkas, slides and hornpipes.  The figures were originally based on French quadrilles, but over time different towns and regions developed their own unique figures.  New dancers can participate in the dances right away, and over time they become more and more skilled at the various figures and steps.  We generally work on a set for a number of weeks until we know it well enough to dance it through without stopping.   Each set consists of several figures and may take 15 minutes to dance.  The sets we know best include the Clare Lancers the Plain Set, the Connemara Set, the Castle Set, the Derrada Set, the Mazurka, and the Sliabh Luachra Set.

We also enjoy ceili dancing occasionally. These dances follow a different tradition and are a bit more like Irish step dancing.  Still they are dances intended for everyone and dances like the Siege of Ennis, Haymakers Jig, the Fairy Reel, the Walls of Limerick and the Sweets of May are fun to do and are often called at dance parties or ceilis.

“Check out the Comhaltas Facebook page for current events”

In addition to dance workshops at some of the Winnipeg Irish Festivals workshops we have organized several Irish set dancing workshops and ceilis.  In 2005 we put on a fund-raising ceili where we called dances for everyone to participate in.  In 2006 and 2007 we had a guest teacher, Maureen O’Leary from Toronto lead us in weekend workshops, and in 2009 we had Tim McAndrew from St. Paul, Minnesota for another weekend workshop. Our guest teachers have helped us learn new dances, improve our dancing style, and learn some of the “battering” steps that are used for various sets.

We enjoy performing our sets on occasion, and these performances are always fun and help motivate us to continually improve our dancing.  Over the years we have performed at various events and venues including the Winnipeg Irish Festival, at the Irish Club, at Festival du Voyageur with the band Cruithne, at St. Ambroise for their Canada Day festival, and at several seniors’ residences in Winnipeg and sometimes as part of a program put on by the Comhaltas traditional musicians.

We meet on most Mondays during the school year from 7:15-9:15 pm at Riverview School, 253 Maplewood Ave (2 blocks east of Osborne) in the downstairs multi-purpose room.  There is no charge to attend. It is best to check before coming since dancing may be cancelled if it is a school holiday, or other conflict. We start dancing in September, and stop in June.

For directions or information :. 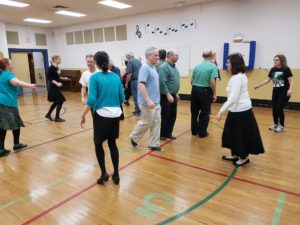 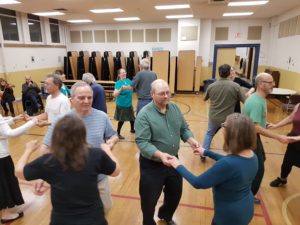 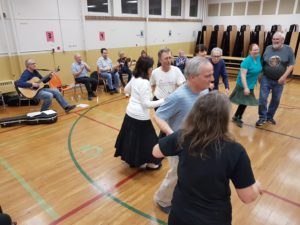 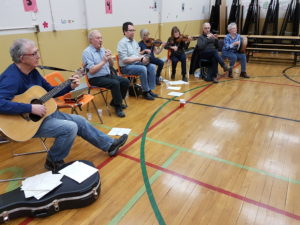 For an information on classes you can download here : Set-Dancing-info-2017

The Comhaltas Winnipeg Irish Setdancing Group meets each Monday at École Riverview School to practise traditional Irish folk dances and socialize. Clad in tartans and stepping lively to the sounds of fiddle and accordion, members of the Comhaltas Winnipeg Irish Setdancing Group insist that the dizziness passes the more you spin.

Every Monday evening a group of eight or more people gather at École Riverview School to practise traditional Irish folk dancing and socialize. The free weekly dance Session is led by Wildwood resident Jeremy Hull who takes the group through routines from counties across Ireland.

Setdancing is a meaningful way to maintain connections to Irish heritage and an artistic outlet for members of the Comhaltas Winnipeg Irish Setdancing Group.

Traditionally, set dancing is an Irish pastime used to pass away the evening on a long winter’s night, Hull said. Set dances are performed in four pairs that dance a series of figures that can take up to 15 minutes to complete.

The Comhaltas Winnipeg Irish Setdancing Group was founded about 10 years ago in the living room of the Coish family and quickly outgrew its home. John Prentice reckons he has been dancing with the group since its inception and jokes that not having to move furniture out of the way was just one perk of the group’s growth.

Prentice, whose maternal grandfather was Irish, said he was motivated to join the group as a way to bring traditional Irish dance to the community in Winnipeg. The recreational and social nature of the group was also attractive to Prentice.

“It’s another form of sharing dance as adults right into old age and it should be accessible to everyone, not just something you’re athletic to be able to do,” Prentice said. “Adult dancing is a lot of high stepping and jigging and performance-oriented dance, but this is just for social dancing. Set dancing is something Irish people do, just like we would go to old time dances in Manitoba.”

Rochelle Rubinstein has been dancing with the group for seven years and agrees that the atmosphere in Riverview’s multi-purpose room keeps her coming back week after week.

“Any place I go and I hear music, it just puts me in a different frame of mind. I’m just in the moment of music and dance, and it makes me feel really good,” Rubinstein said. “It’s a very fun, rewarding outlet to do what you love.”

While the Comhaltas Winnipeg Irish Setdancing Group does perform on occasion, particularly in the weeks leading up to St. Patrick’s Day, performance is voluntary.

Hull explains that most performances are in an effort to showcase Irish heritage and to show the public what they’re missing out on.

“We want to share it,” Hull said. “For performances there’s two sides of it: it gets everyone up, and excited and they want to do a good job and it gets them interested in the dancing.

“On the other side of it we’re hoping people will see it and want to join us sometime.”

Dennis Lyons joined the group about three years ago and said in addition to the social and artistic benefits of setdancing, it’s also a meaningful way to maintain connections to his heritage. The sweat dancers workup doesn’t hurt either.

“You’re constantly in motion, and the fun part is as you’re learning a new dance there are different moves and everyone starts laughing. Everybody makes mistakes and everybody learns,” he said. “Everybody should involved in some kind of arts and culture, and this is one that I particularly enjoy doing.”

Check out the page at: http://www.winnipegfreepress.com/our-communities/souwester/Dance-the-Irish-way-415505283.html

When Irish eyes are smiling,
Watch your step !

One Response to Irish Set Dancing